We knew the Park was closed when we woke up this morning.

We had a few errands to take care of, which we did in short order.

We talked about a few things we could do, and places we could go, and decided to just spend the day relaxing in this a very pleasant place. Craig read and did some internet research, and I sat outside and did some needle point.

At one point in the afternoon I went up to the office to ask a question, and ended up having quite a long conversation with a man from Australia about our political process. His questions were excellent, and I felt I did a pretty good job explaining how our government is set up to work.  I was really glad I had learned so much in my high school Civics class. He expressed amazement that although the congress had passed the Affordable Care Act, and the Supreme Court had upheld it as constitutional, and the American people had reelected Obama, the Republicans were still able to hold the country hostage over its implementation.

But then, what can you expect from an Australian.

Maybe Kool-Aid would be more appropriate.

This afternoon I went for a little walk around the campground.  The river runs along the back edge where all the tent campers are. 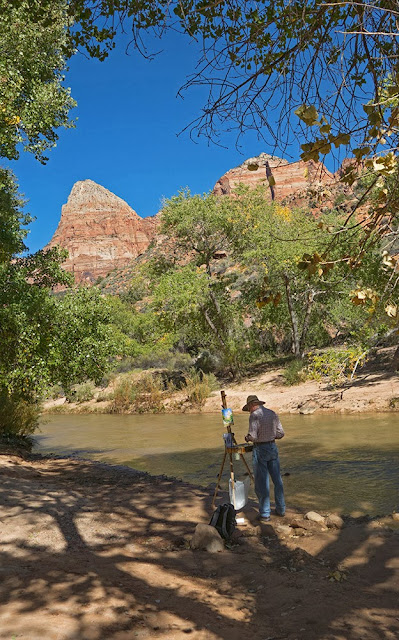 This older gentleman was painting in the shade. 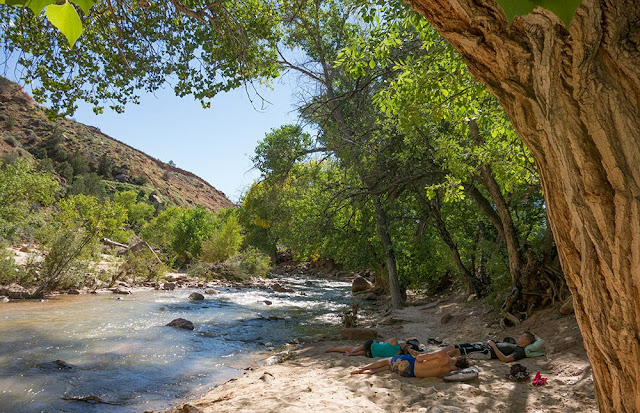 This group of young people were taking a nap in the sand.  There were others wading in the icy waters.

Monday night our Alfa was joined by a new friend.  As I was preparing dinner we saw a new neighbor pulling into the site next to us. Another Alfa. What is it about seeing another rig of the same brand as your own? We said hello and promised to visit after they had gotten settled.

We ended up spending the evening chatting and exchanging stories. They had been motorcyclists in their younger years, and still have a two person Lance.  In a spot across from us there was a gathering of about twenty German motorcyclists who were staying in the hotel.  At some point we all got chatting back and forth and some of the Germans came over to see the inside of their Alfa.  "Only in America" said one German, looking at a Class A diesel-pusher.

Of course politics came up and we as Americans had to explain why the National Park was closing because of a disagreement over health insurance. They just shook their heads. One asked why we allowed such foolishness.

We can come back another time, but for so many international visitors this is a one time visit.