We have been north of it, south of it, east of it and west of it, but have never made it to Canyon De Chelly until now. It has been on my "must see" list ever since I read a post by Al of the Bayfield Bunch sometime before we even had our RV.

We drove down from Mesa Verde on Monday, stopping to see the Four Corners Monument. It was on Craig's bucket list.

When we were still at the Balloon Fiesta, I spent some time looking through my campground books, and searching the internet for campgrounds near the canyon that had hookups. No luck.

We have had bad luck with a couple of parks that were "walk up only" this summer. I had mixed feelings about the reviews I saw for the campground in the park itself. Partially because Cottonwood campground was described as "shaded by large, mature trees". This would be a positive in the heat of summer, but this is baseball playoff time, and I know Craig wants to be able to see the games on TV. Large trees can prevent satellite reception.

We had our GPS set to take us to an RV park down on I-40, that was about 100 miles past Canyon De Chelly, so we decided to stop for a quick look and ask some questions about the campground at the Visitors Center, leaving our options as open as possible.

As it turned out we could see the edge of the campground from the VC, and I spotted a nice big space, that had no trees. Hooray! A place to be. We ended up staying for four nights.

We woke up early Tuesday morning to thunder and heavy rain pounding on the roof above. We snuggled in and had coffee while reading the news and other bloggers' posts. By the time we were up, showered, and had breakfast, the storm had passed and the skies were clear.

Our plan for the day was to drive the South Rim Road and also walk down the White House Trail. It is the only place you can go into the canyon without a Navajo guide. 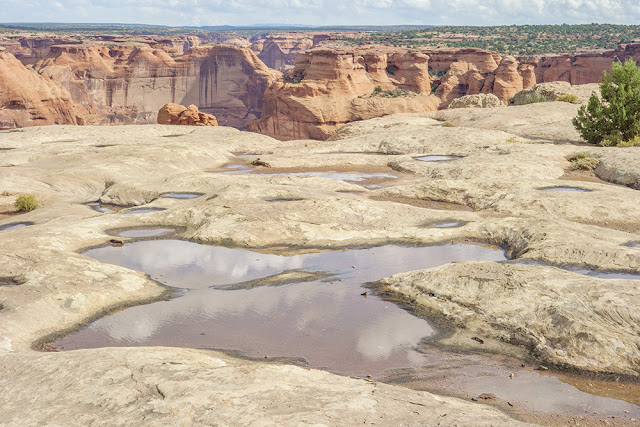 We stopped at several observation points. The weather was perfect, 70° with a sweet breeze. The clouds were puffy white, but growing. 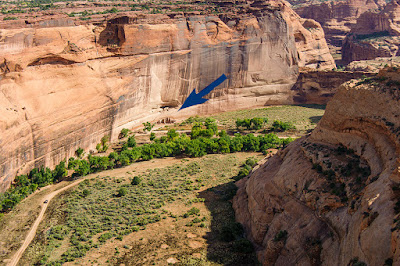 Then we tackled the 2.5 mile (round trip) hike down to the bottom of the canyon to see a ruin called the White House. The arrow shows where we were going.  It seems to me these people were more sensible than those who built high on the cliffs. This building was at canyon bottom level. There was also a building above it in a cliff niche. 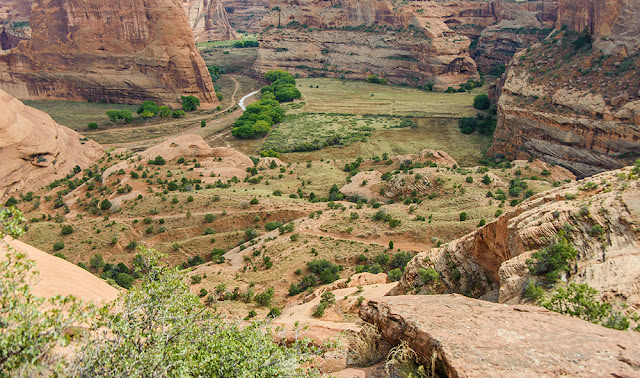 This is a look at the trail down. There were some rather rough and steep sections, and as we went down I kept thinking about the return climb. 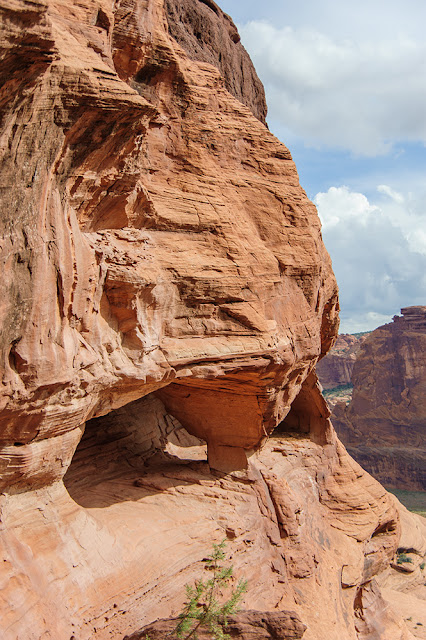 We discussed whether this center support was a natural or man made feature as we hiked down the steep pathway.  Craig thought the rocks involved were too large to have been manipulated by people in such a location. 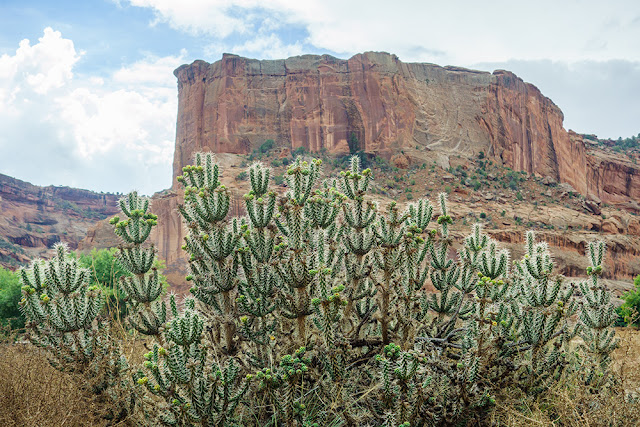 Views of the White House Ruins: 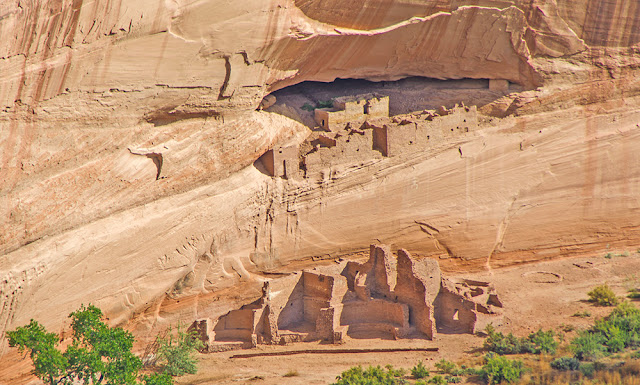 Although we got a closer look at the ruins, we noticed that the Navajo vendors were packing up their wares quickly, 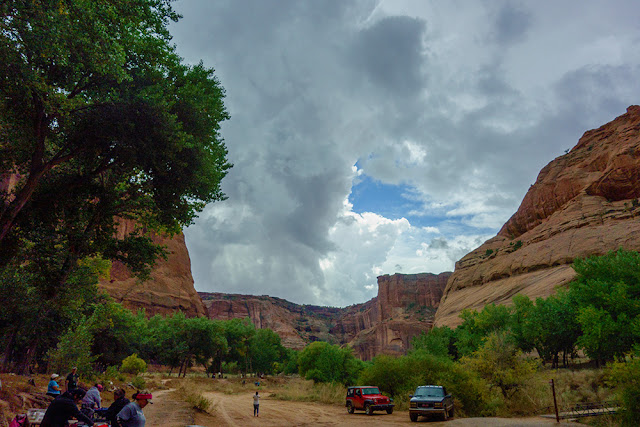 and that all the other hikers were heading back up the trail. The thunderheads were building above, and one of the vendors told us there were thunderstorm and tornado warnings for the area.

I did not take any pictures on our hike back up. When faced with a one and a quarter mile, 600 foot elevation hike up the side of a rock canyon I would normally take my time, stopping frequently to catch my breath, and just do it. I would be glad to see the top, but I would stay within my comfort zone. But this time it was go, go, go! As slow as I was, I did keep going with only a few short stops to catch my breath. We felt threatened by the clouds, but quarter sized drops of  rain that started to fall on us. We really did not want to be on the side of a slippery, rough rock face of the canyon when the lightning and/or downpour started. 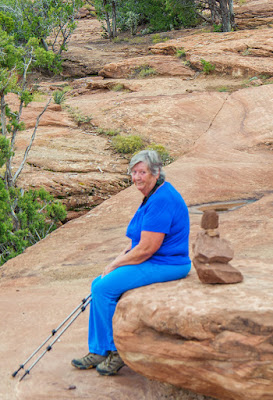 By the time we got to the top, the rain had stopped, but the storm was still on its way. I was very glad to have a moment to catch my breath before we headed for the car.

You have no idea of how much I regret being so fat! I was a smoker for many years, and although it has been a long time since I quit, my lungs remain compromised from that abuse. My son still smokes, and I wish I could say something that would influence him enough to quit!

It did rain quite hard that night. A strange thing happened the next day. At about four in the morning I woke feeling quite nauseous. I had a pounding headache, and stayed in bed with a barf pot all day. I don't know if I picked up a twenty four hour flu, or if my body was over stressed by the rapid climb out of the canyon the day before. Craig never got sick, and I was OK the following day.

On Thursday we drove the rest of the rim roads and stopped at the remaining interesting overlooks. 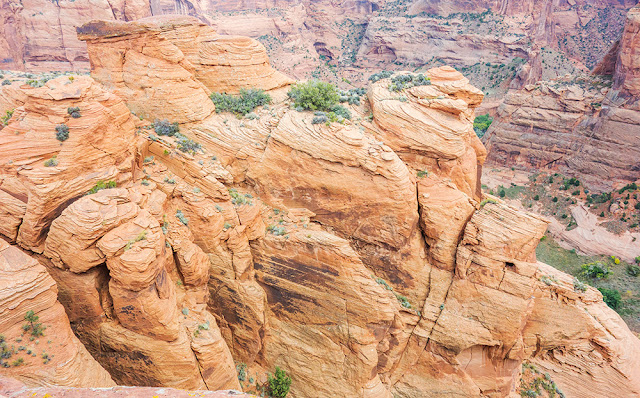 A few pictures cannot show all the fantastic views we had. 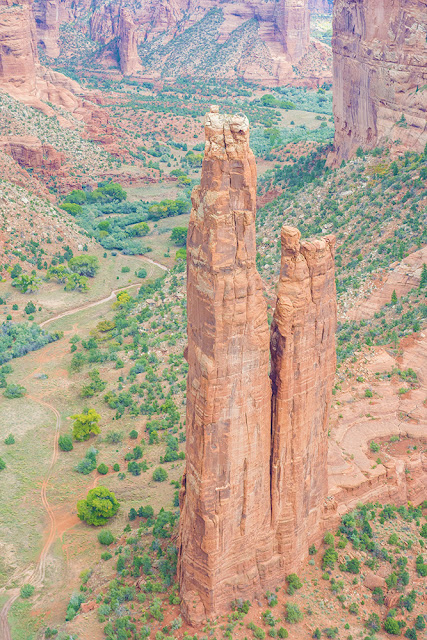 Canyon De Chelly is a remarkable place. We enjoyed our few days there and are very glad we stopped to see it.

Cottonwood Campground was peaceful and we are becoming less leery about the idea of dry camping for a few days at a time.

I doubt we will ever be full time boondockers, but we might just try some nights out in the BLM lands next year.

[From Craig] Merikay and I found Canyon de Chelly, in the heart of the Navajo Nation, to be much more than we expected. We recommend it to anyone who's interested in geology, ancient cultures, or current Navajo culture.  I like this place!