The ancient Pueblo people built large buildings and then left them and moved on to other locations. Archeologists do not know exactly why, but the modern Pueblo people say it is because they were on a journey, and if they spent a hundred or a thousand years in a place,  it was just a stop along the way. 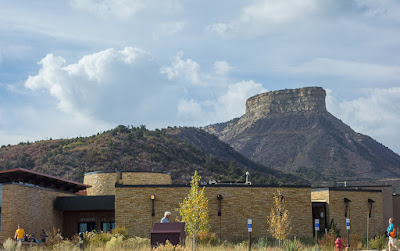 Our first stop at Mesa Verde National Park was at the Visitors Center for a map and other information.

The weather forecast was for possible showers, so we decided not to linger over the VC exhibits and to drive on up the Mesa. As it turned out, although I felt I needed to carry my umbrella  on our brief stops and walks, I hardly used it. 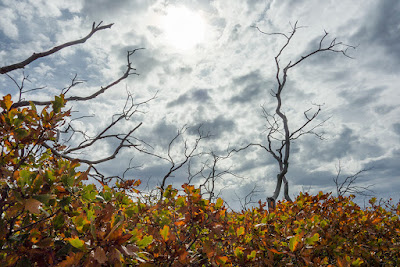 The weather was best described as blustery and threatening. A plus was that there were very few other people on the trails and overlooks, so we had no parking problems.
Although the aspen trees are past their peak, there is still lots of fall color on the hillsides. The oaks above were along a short trail going up to the highest point on the mesa. 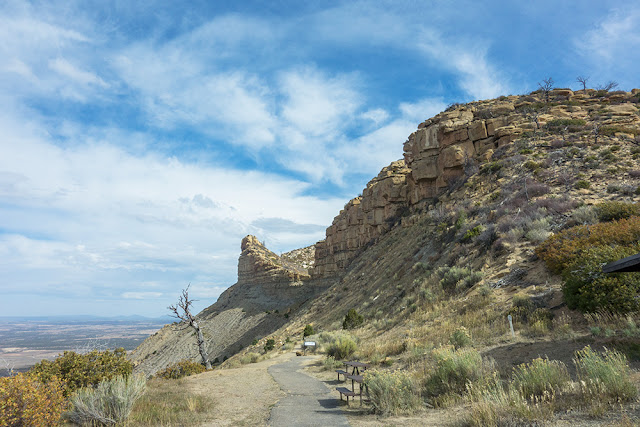 The views of the valleys below were fantastic. The path in the center of the image above was once part of the main road up to the mesa top. Fortunately it was replaced by a tunnel!

When we got to the top of the mesa we first drove the Mesa Top Loop road and then the Cliff Palace Loop.

People have lived on the mesa for thousands of years. There are many known but unexcavated archeological sites up there. Some of the sites that have been dug out are protected by sheds with sturdy railings to protect them. 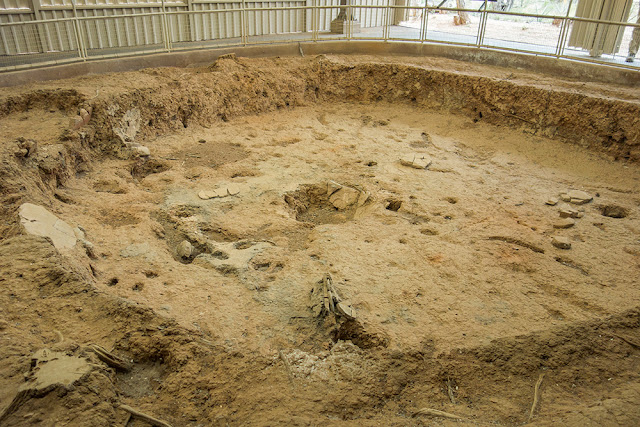 Above is an early style of pit house. It consisted of a hole dug out of the ground, with a fire pit in the center, and often a second chamber for either sleeping or storage. Short walls and a roof were constructed out of branches and bark. The floor was probably covered with reed mats and furs. 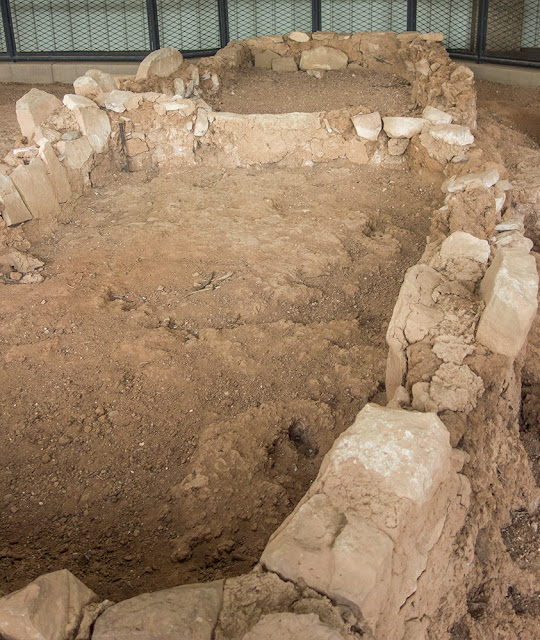 The next stage of structural development was the addition of simple, single-stone-width masonry walls. 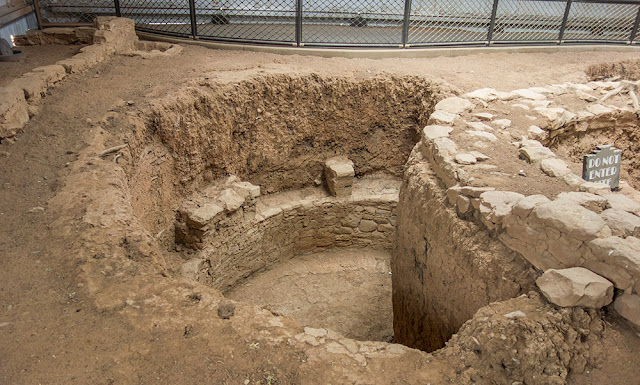 The most recent pit houses were much deeper, and included side benches. This round pit was probably used for ceremonies. And the design evolved into Kivas that are part of current Native American communities

Also revealed at this site was an example of a thick wall that was three courses wide.

This place was part of an extensive village. In 1200 AD, more people lived at Mesa Verde's surrounding mesas and in the valleys of what we call the Four Corners area, than live here now! Although they left the area before Columbus discovered America, their descendents are among us.

On both loops we stopped at several places were we could see across the canyons to where the ancient Pueblo people had built in and under huge overhanging cliffs. These structures came after the pit houses. Apparently the people continued to dry-farm the top of the mesa, but many of them lived in such large niches in the cliffs. 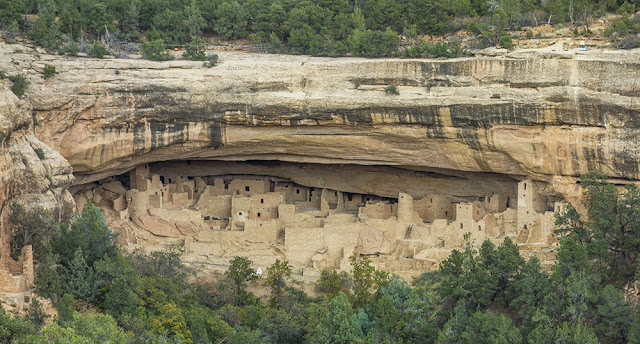 At one stop we were able to look down on a structure. 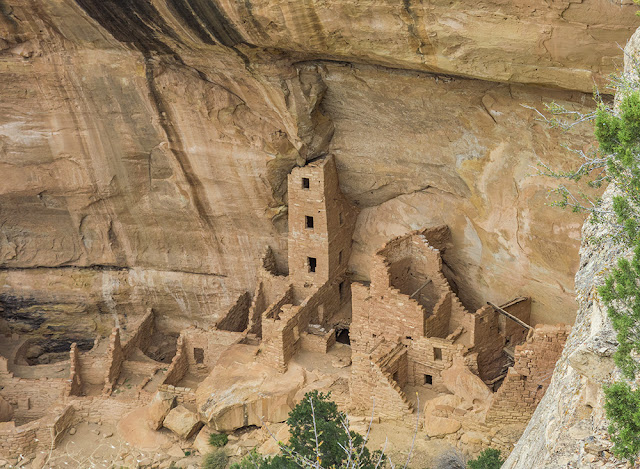 As you can see, this structure rose four stories! 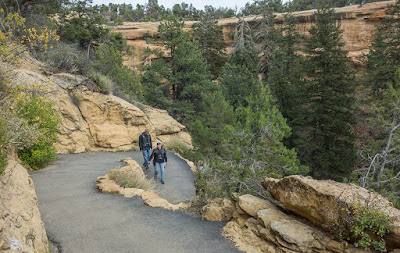 We walked down a half-mile path to the Spruce Tree House site.

The wide path was paved, and there were a lot of switchbacks, so it was not as hard to get to the bottom of the canyon as it might have been on a dirt path. Once down, we could see the spring area that provided water for the people who lived at Spruce House. 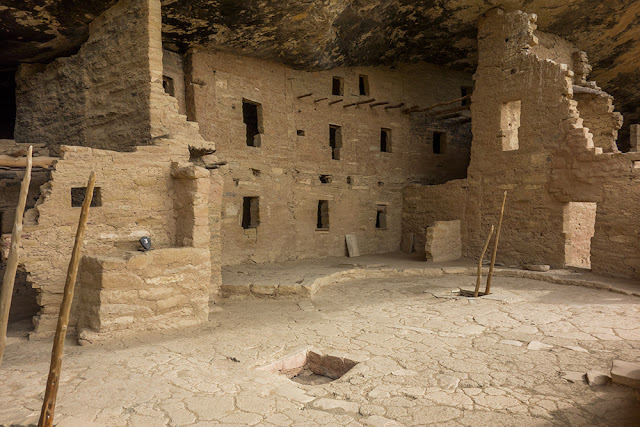 I think this was my favorite part of the day. There was a ranger on site to answer questions. When this place was occupied, all of the rooms were enclosed and the walls would have been plastered smooth. Many walls were painted. At the museum that we visited later, we saw pictures of what the sites looked like when they were first discovered by Anglo archeologists. (The modern Pueblo people do not consider them as having been lost or forgotten.) The cleanup and partial restorations have been done with skill and care.

When we started the day at the Visitors Center, we purchased tickets for a ranger-led tour of the Balcony House at the end of our day. However, when we got there we reconsidered what was physically required to go on the tour: several tall ladders, low doorways, and a crawl-through tunnel that was 20 feet long and not much wider than the ranger's hat. I was not enthusiastic about these obstacles, so we decided to pass on the tour. I would have loved to do this when I was younger, thinner, and had a more flexible back. When we were at the other ruins earlier in the week, I could not bend over low enough to get through some of the doorways. My spine is partially fused.

I'm not really sure where we are going to stop next. We have decided to hang out here for a few days and catch the Sunday football games.