From Tombstone AZ we drove south to Bisbee, not far and very much a part of nineteenth century American mining history. Where silver was the prize in Tombstone, copper made men rich in Bisbee. Early mines were all underground, but in later years open pit mining became standard. 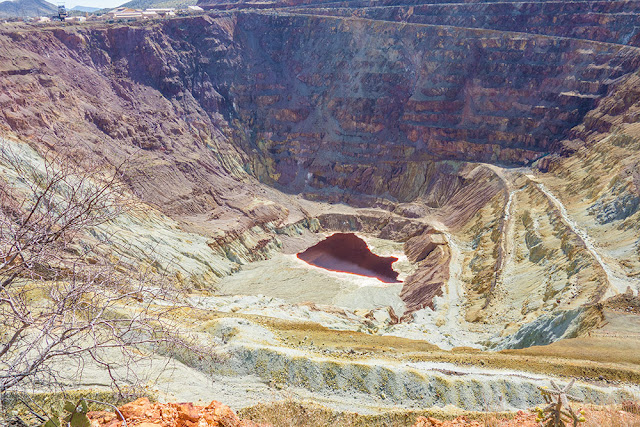 The Lavender Pit mine is more or less in the middle of Bisbee. This open pit copper mine is a remarkable sight to see. 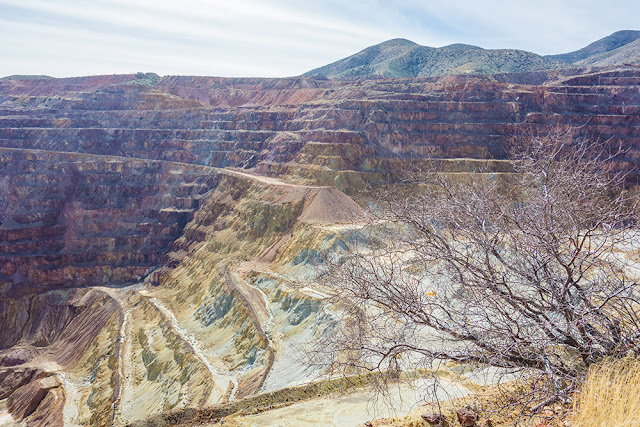 You can see that the sides have a lavender cast, but that's not the source of the mine's name!  It was named in honor of Harrison M. Lavender, a VP of Phelps-Dodge Corp. who initiated and oversaw the development of the mine starting in 1950.

We did not do much there because we were both quite sick. We did drive around town and also walked through the city museum which was very nice. After two nights we pulled out and headed for El Paso TX. We might stop in Bisbee again sometime when we are feeling well. 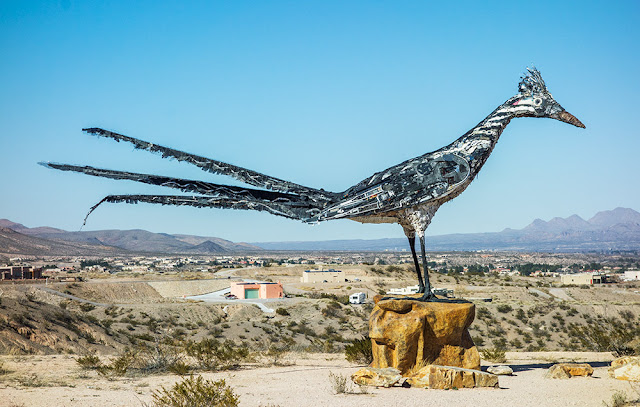 First, my foot. While walking through the Bisbee museum, the velcro strap on my boot broke. Since it has been six weeks, I decided to try not wearing it. Unfortunately I still felt some pain, and so I got an appointment with a podiatrist in El Paso. After getting new x-rays, the good news is I do not have to continue wearing the boot unless the pain gets much worse. I am currently wearing my hiking boots with the laces tied firmly. The bad news is I do have a bit of tendonitis and one of the fractures is only about 80% healed. The doc told me to keep taking it easy, and not try any hiking for at least two more months  Oh well. At least I'm out of the boot, and I can drive again!

For six weeks, both Craig and I have had what we treated as bad colds. Robitussin and Mucinex became a regular staple in our grocery purchases. I thought he sounded worse, he thought I did, but we both had deep barking coughs, particularly at night. Knowing we were heading south to Big Bend National park, where doctors might be far and few between, we decided to go to an Urgent Care Treatment Center in El Paso. For people like us, these walk-in centers are a perfect solution for everyday medical needs.

Some do not take all insurances, so if you do stop at one, be sure to ask before waiting for help. If you are having a heart attack or other serious event, go to the nearest ER!

The doctor and medical technicians that saw us were all very good.
It was also nice that they saw us as a couple, at our request, since we both had the same problems. After throat swabs, chest x-rays, and examinations, we were both diagnosed as having Strep infections that have gone to our lungs, and pneumonia.  Good thing we went in!

We were each given two shots, in our butts, and an inhalation therapy treatment in the office, plus five prescriptions, including antibiotics and inhalers.

Because we are travelers, we won't be able to go back, so were given a print-out of our diagnosis and treatments and told to not hesitate to see another doctor if we don't see full improvement. It might take a week or so, but we should be OK.

And finally, more from my new hobby, Adult Coloring Books! 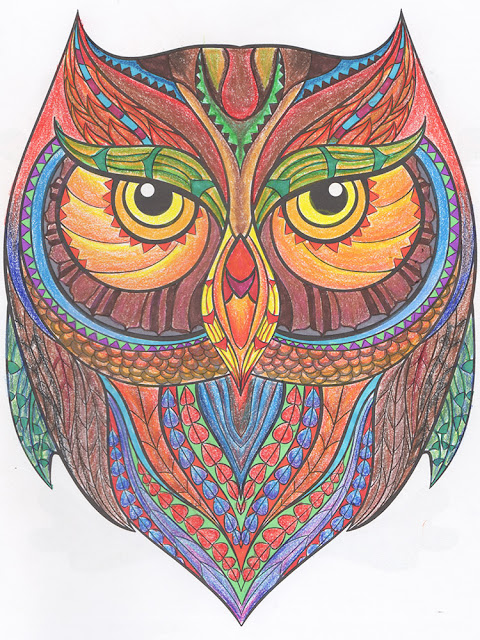 [From Craig]  As I finish proofreading this, Merikay is outside looking for Marfa lights here at the Viewing Center south of Marfa, TX.  Hope she doesn't stay out too long, so that our medical conditions improve together.  Guess I'll go look too. Life is Much Better!
Posted by Merikay at 5:35 PM