On the Road to the Gulf of Mexico

We are heading to the Gulf of Mexico, but given that we were both quite sick, we are taking our time getting there. We did push ourselves to get out and drive a bit in the Big Bend National Park on two of the days we were there, but we also made sure we took healing naps and took all of our medicines at the proscribed times. We took the last antibiotic yesterday, and today Craig seems quite well.  I am almost there. We will continue to rest and hopefully there will be no relapses. 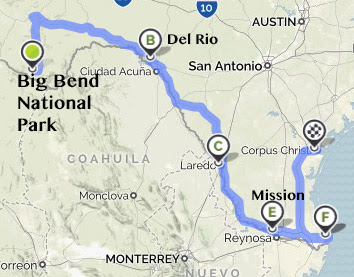 Monday we traveled almost 300 miles from the Big Bend National Park to Del Rio, Texas. We drove it in one day, and then rested the next.


Wednesday, we went 200 miles, south, to Laredo, Texas, "C".  We plan to stay here for five days, and then go to South Padre Island, "F" where we have a week long confirmed reservation. Craig also wants to visit Mission Texas "E", so we will backtrack a little and go there before we head east up the coast to Corpus Christi.

Although we lived in Texas from ’78 to ’83, and have traveled across the sate several times over the years, we have never been to this part of this enormous state. Much of our route has been within a relatively short distance from the Mexican Border. Between Big Bend and Del Rio we drove many hours through seemingly endless desert and uninhabitable lands.

We saw a couple of tethered dirigibles that we think were Border Patrol observation devices, and many Border Patrol trucks and agents.

We did not see any great hordes of illegals. 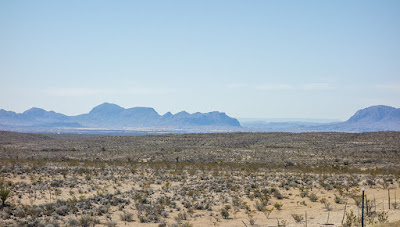 In my humble opinion, building a great wall in there would be both a huge waste of resources and extremely unnecessary.


The land south of Del Rio, Texas is another matter.  We traveled through a lush area of agricultural land and a couple of vibrant small towns. We weren't sure where the river was, or how open the land and roads might be, but I wondered how effective a wall would be there. Farmers need hands willing to do the back-breaking field work. There are not enough American workers who are willing to do these jobs for the pay that is offered.

I really think our immigration problems will never be solved unless people stop wanting to pay less for labor and services. If  the people of the USA didn't hire illegals as farm workers, gardeners, roofers, nannies and such, and if businesses did not pay lower "under the table" wages to them, there would be less of a problem. We, the people, benefit from these lower costs, and then complain about being taken advantage of.   Personally, I want cheap produce.

I have been watching way to much political coverage on TV.

Sometimes my thoughts seem to boil over. So, this is probably a good place to end this post. It's just that by seeing the reality of the land, I realize that building a wall is not the answer.  That would be too easy conceptually, too hard in practice, and not really solve anything. No matter who paid for it!