I want to keep a record of where we have been,
I want my family to know where we are,
Just because!

I've really been in a blogger slump for the last few weeks. Being sick didn't help, but we are over that now, and I still don't feel much like writing.

I wrote most of a post about our days in Laredo, but found it boring and I have no real desire to publish it. We did have a nice time, went to a music festival, a parade, and some pretty good fireworks. The weather was pretty nice too.


We are staying a week at Isla Blanca Park, which is a county park right on the Gulf. There are over 400 full-hookup spaces, each with a modest side patio area. The town, sea, and climate remind me a lot of the Florida Keys, but the weekly space rent of $185 is a lot less than what we paid at the State Parks in Florida.  Also, we called ten days ahead for a reservation here, but in the Keys we were lucky to get a spot eleven months in the future.

So far, the only negative I can come up with would be for dog owners. The grass seems quite full of sand spurs, and they are hard on doggies' paws. 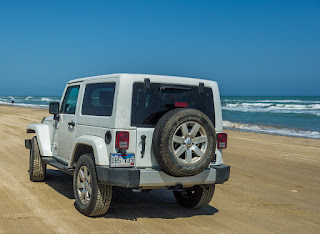 We took a walk on the beach Monday afternoon, and then on Tuesday drove a few miles north of town to where we could drive the Jeep right on the beach.

Our neighbor at the park told us we could drive 35 miles on the beach. We didn't go that far, and instead parked and walked along the water's edge for a way. 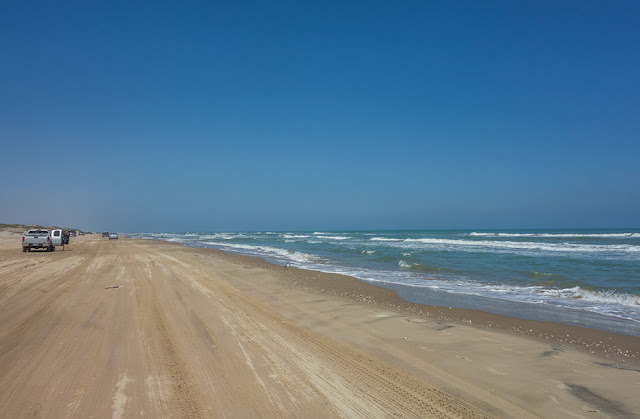 There were a lot of fishermen working the surf. Watching a few catches put me in the mood for fresh grilled fish, so on the way home we found a seafood market. Fresh "catch of the day" Black Drum fish is on the menu for tonight's dinner.

Wrap-up: the black drum was very good, even if it did sound like something that should have been part of the music festival in Laredo!

Curiosity: why did our post "On the Road to the Gulf of Mexico" attract 2237 page views on Friday, Feb. 19, when most of our posts attract less than 500?  Is there great interest in the possibility of a wall along the Mexican border? What do you think?