I am happy that from time to time Craig contributes to these pages. This is one of those times. His description of the America's Cup races is below.  I thought I'd write a bit about our days.

The weather in San Francisco can be very unpredictable. We experienced an absolutely perfect day on Saturday. Inland, the temperatures soared into triple digits, but in the city it was in the 70's with bright sunshine and a gentle onshore breeze. We have been here many times, and I don't think the weather has ever been this beautiful.

We were up early Saturday, I packed a lunch, and we were off on a 20 minute walk from our RV to the Larkspur Ferry dock. Neither of us had ever done this, but all went smoothly and we were delighted with the $4.75 senior fare rate.


On Sept. 7-8 we went to see the America's Cup races in San Francisco Bay, and even spent money for grandstand seats. These give you a higher point of view for a cost of $2 per foot of elevation for the least expensive seats, the ones we bought. But the tickets cost less than those for the Rose Bowl parade or a World Series game, and way less than for a Super Bowl.

There were 2 races each day. From the USA point of view, they could be described as "3 learning experiences and then a victory".

It was clear from the start that the two boats were pretty equal. In the first race each day, Oracle Team USA was ahead at one point, but better sailing by Emirates Team New Zealand allowed them to come back and win the race.  In Saturday's second race, Team USA's boat may have had a small problem with the mainsail (more properly "main wing") but the team may have let it get to be a bigger problem in their heads, and they weren't very competitive.

The way the competition was set up, Emirates Team NZ has raced against challengers from other countries, while Oracle Team USA only got to race their two boats against each other. Probably Team NZ was better prepared, but experience is now more even.

Sunday Team USA was competitive all day. They won both starts, which is very important in races that only take half an hour. The last race Sunday they led from start to finish, but at times by only a few feet. It was the closest race we've seen in 20+ years of watching America's Cup racing. About the time I was about to faint, the US boat won by a boat length or 4.  Wow!

Fog caused some problems for the network helicopters Sunday, and may be even thicker on Tuesday. This pic is courtesy of the SJ Mercury News: 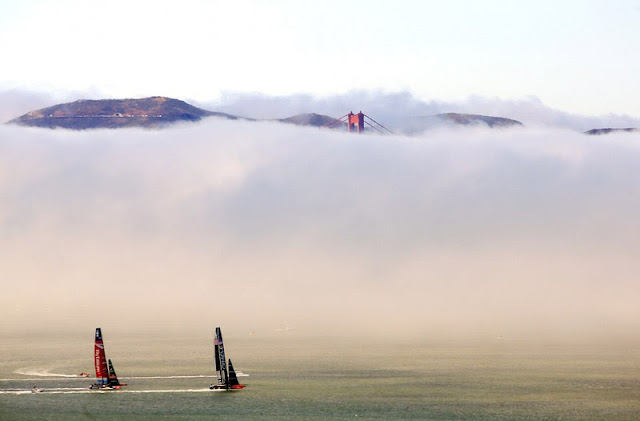