Wednesday's weather was downright perfect for a day in a Florida park. Mid 70's, sunny, with a gentle breeze. 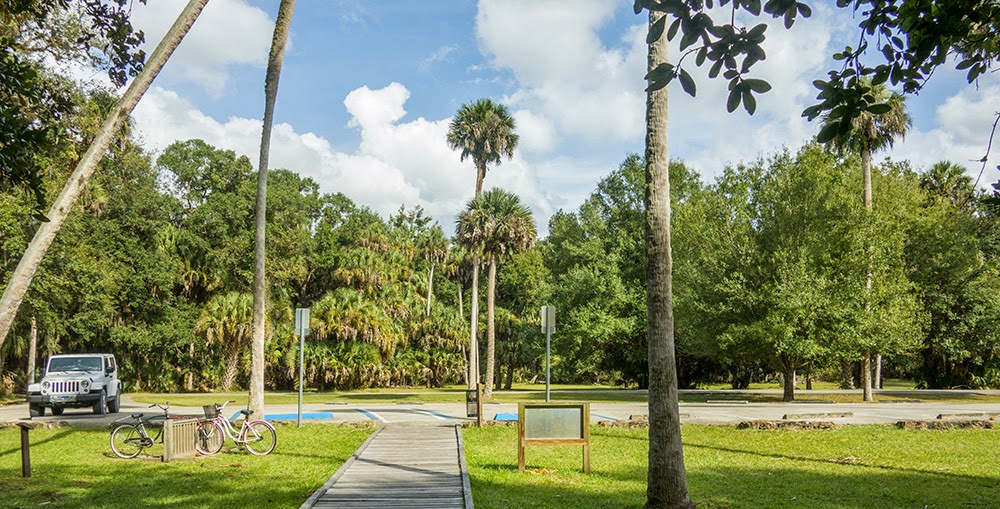 Highland Hammocks State Park was definitely not crowded. Tourist season doesn't start for a few more weeks. No problem parking, and we had the trails all to ourselves.  We seem to be "early snowbirds".  :-) 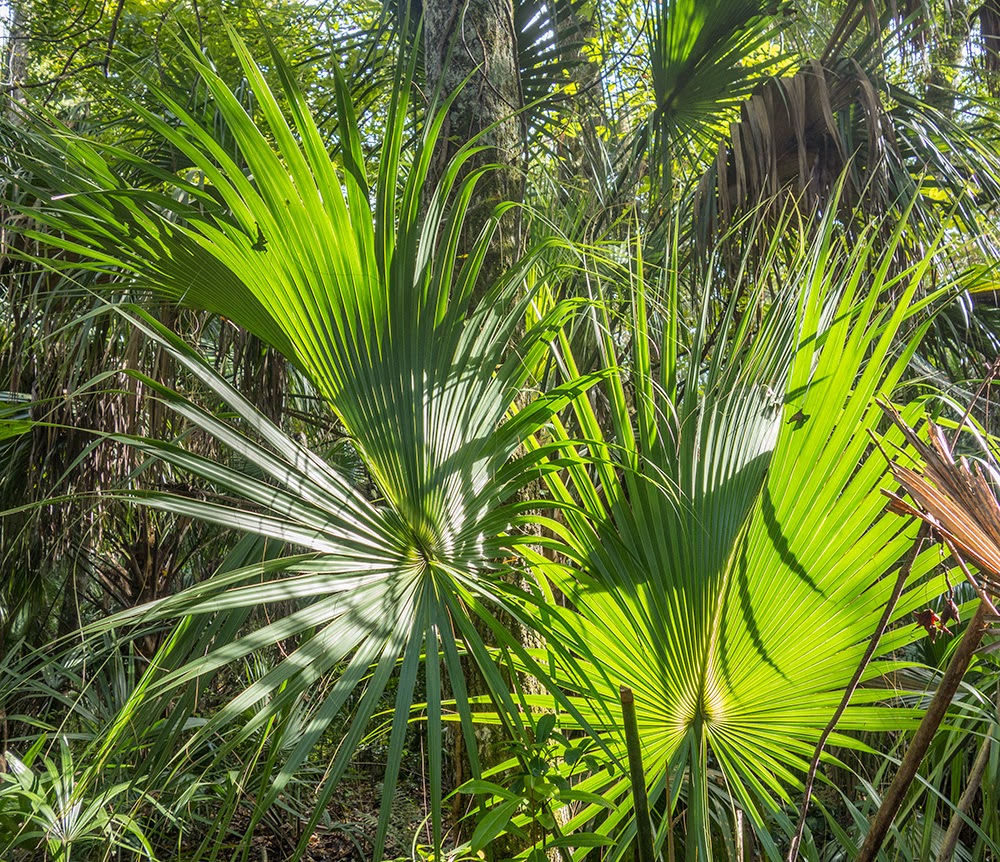 Palmetto plants are everywhere. Small ones, big ones, dense stands and individual plants. I was enchanted by the light shadows playing on this pair and just had to include it in this post.

There are numerous, short loop trails in the park. We walked several, and our favorite was the Cypress Swamp trail. 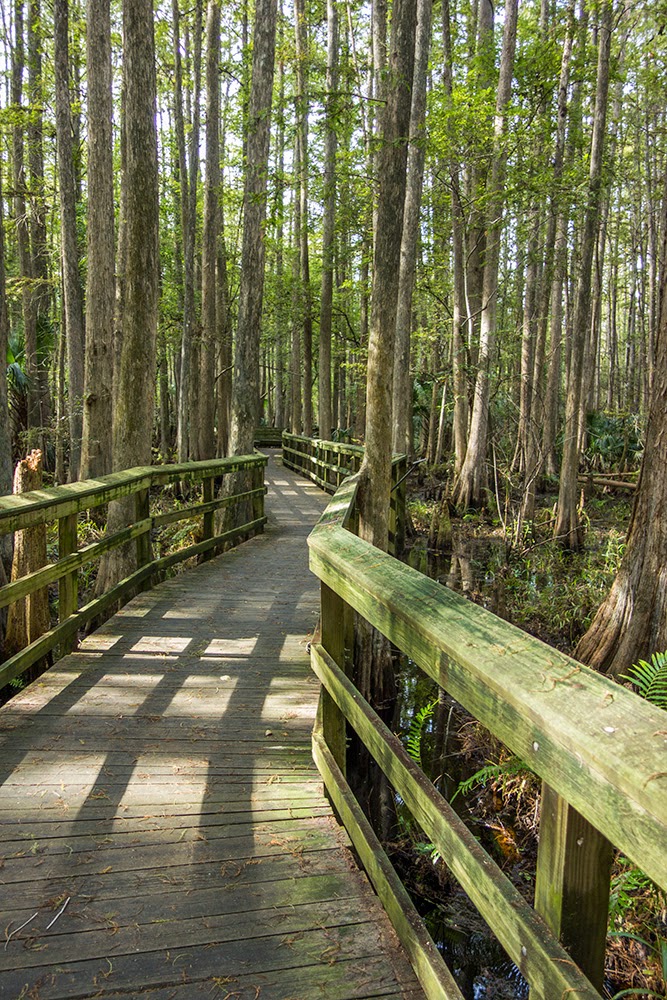 It started with a short sandy trail which lead to a sturdy boardwalk through the cypress swamp. 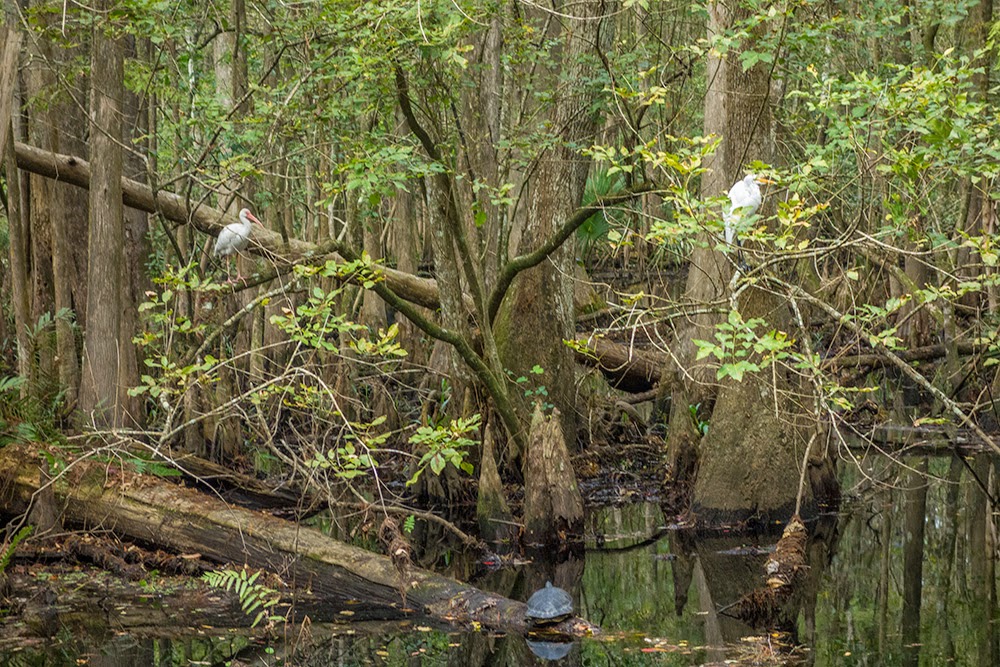 These were the only birds we saw, but were delighted to spot a turtle at the same time. 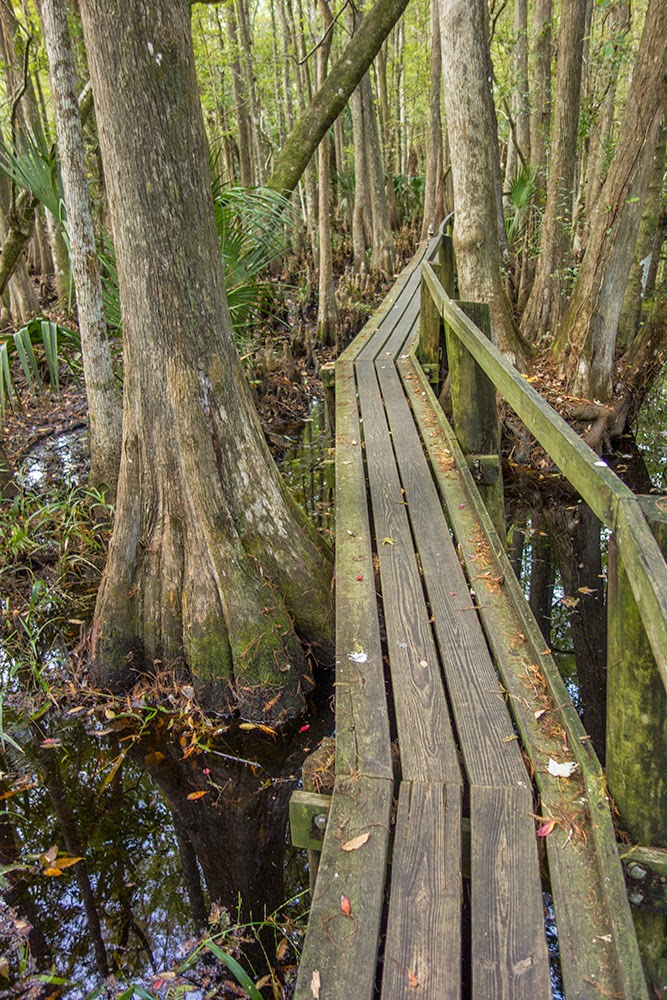 This was one section of the boardwalk that I did not like very much, especially where it was over a wide section of the open river. It was a bit narrow, and had no railing on one side. I would not have been comfortable if there had been lots of other people on it. 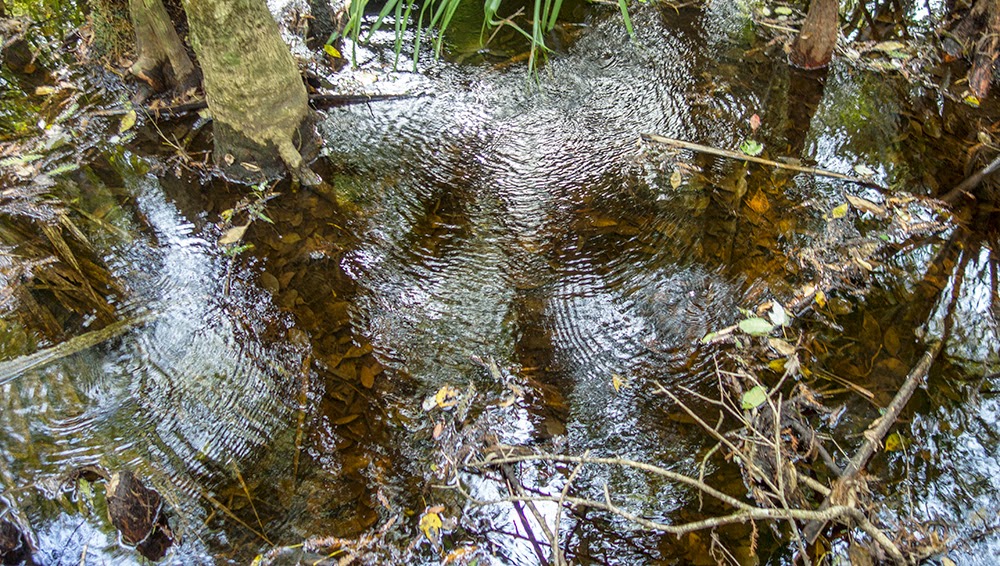 When we looked over the edge of the railing, we saw the water surface was popping with striders. They were so small we could barely see them, but their actions caused many rings. In some places we could see leaves moving with the slight current, but in other areas the water was still and mirrored the trees.

[From Craig] We did see places where numerous water-rings were caused by insects, but the water disturbance in the picture above was much too extensive to be caused by them.  I think it was upwelling from springs. 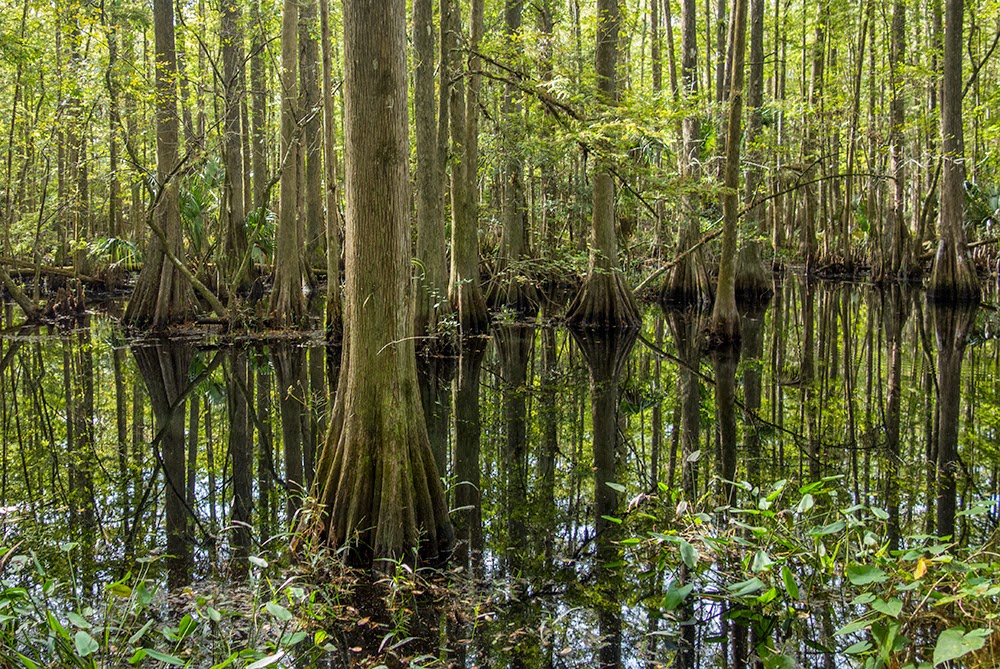 The image below is of the water reflecting the trees and sky overhead. 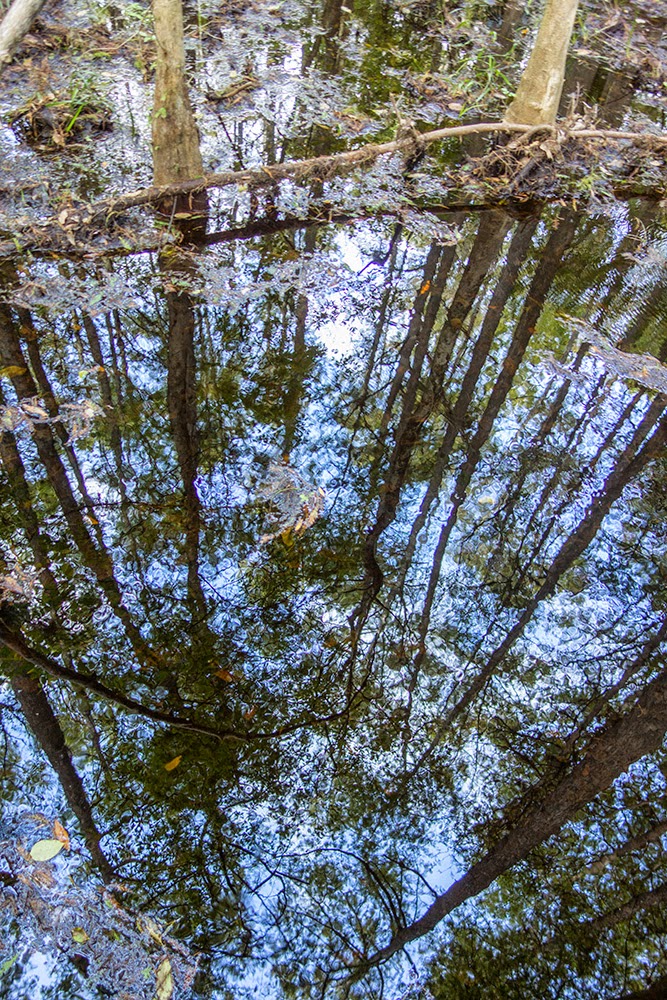 We kept looking for alligators, either in the water or on the banks but did not see any. We spotted one armadillo in a drier area. 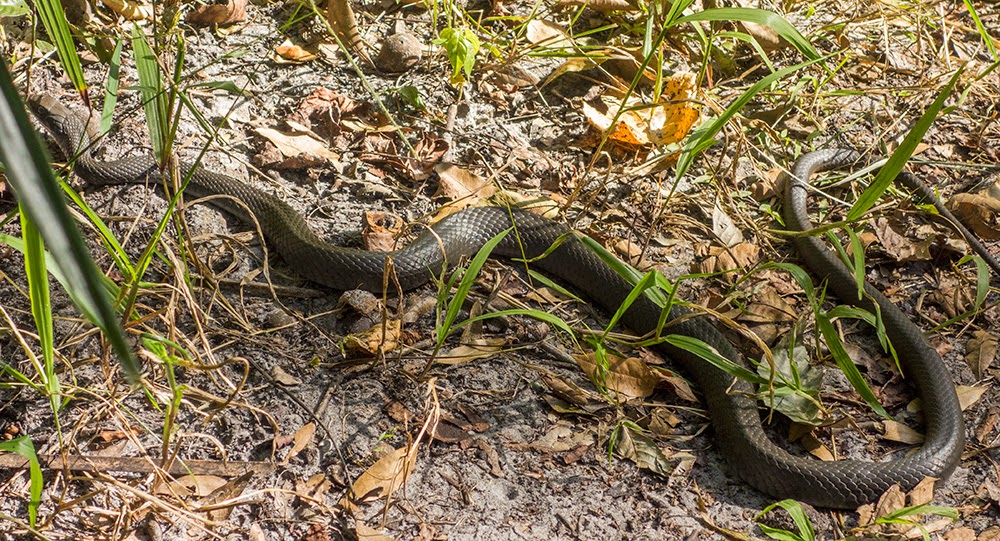 And I saw this guy, a king snake, on the sandy part of the path. Craig was ahead of me at the time,  and I swear he came within inches of stepping on it! King snakes are good guys and not poisonous. I generally keep my eyes on where I am putting my feet because I am such a klutz. If I want to look up or about, I have to stop. Looks like that might be a good thing in places like this.

We took many more pictures, but I'm sure this will not be our only swamp experience to post about.

They call the state park system the "Real Florida."  We are pleased to be discovering it on our walks.