I my last post I wrote about troubles and challenges. All except for the awning extending while on the interstate were just challenges. I write about them because I know when I was a "dreamer" and waiting until the day we could go full time, I read many blogs trying to learn as much about RVing as I could. As a fulltimer now, I want to show those who are still dreaming, that although there may be challenges, they can be overcome and the life is worth the trouble.

Also, I used to correspond with someone who wrote as if every thing they did was the most wonderful thing. This person's emails were like the traditional Christmas Letter.  I'd rather be real, and share some of the not-so-good days too.

Now for the awning. We are waiting on an estimate to get the motor replaced and the awning remounted on the side of the rig. It is the kind that goes in and out with the touch of a button inside, and retracts by itself when the wind comes up. Who knows why it went out by itself, but we will be sure to add some sort of safety feature to prevent that from happening again! 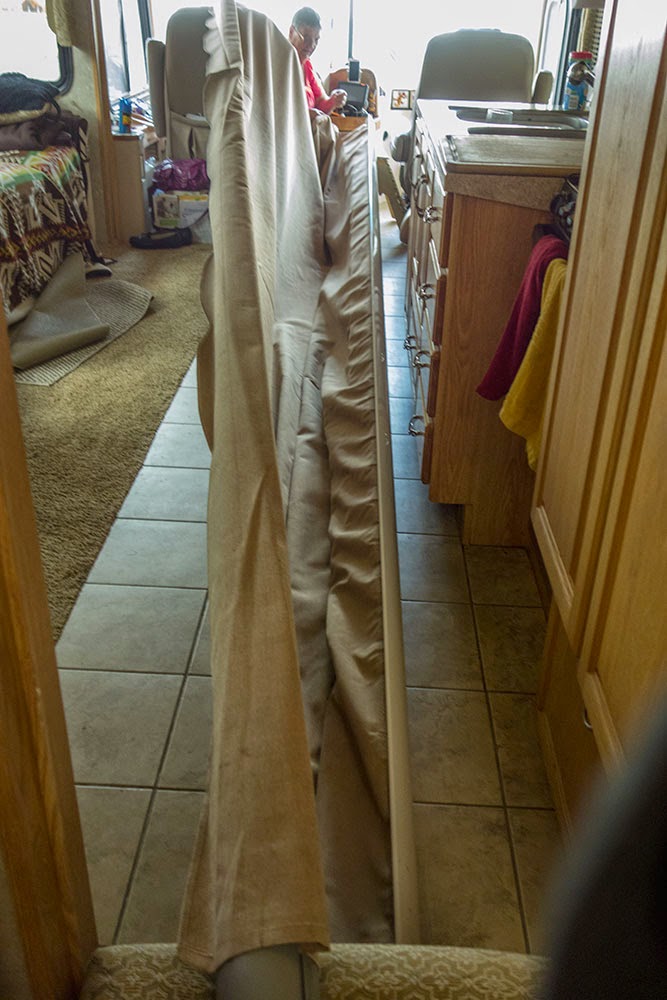 When we brought it in the Alfa it was quite wet. We unrolled it on Saturday while we were gone, and it got pretty dry. When it was unrolled I noticed some of the hem stitching on one edge had come out. On Sunday I resewed it by hand. The canvas is in good condition and no other stitching is loose.

When it is rolled up, it tucks under the kick space under the kitchen cabinets and in front of the chair area, extending into the space between the driver's and passenger's seat.  If we are careful going in and out of the rig it won't be a big problem.

The guys that came to remove it are supposed to call with a repair estimate, but if we don't like it, we may just carry it around with us until February when we have an appointment with one of our two favorite Alfa repair places, Albritton's  in Louisiana.

We will see.  I'd just as soon get it fixed and out of the coach.

For my friends who recommend always looking at a campground on Google Earth, I do that some of the time, but usually not.
I use Google Earth all of the time when hunting for parking stops along the way, or to look at repair facilities or propane-filling places, or sometimes even gas stations so I know how to pull in. But I still trust that if I have a reservation for a 35' motor home there is a way into the park. If we had a 40' I might be more careful.  All of our challenges usually come when we are in the wrong place and Google Earth won't help us then. I would not have caught the mistake in entering "E" instead of "W" in the Navigator by using it, because I would have given Google Earth the correct address as shown on my paperwork. Also I would not have seen the truck in our space since Google Earth is not "live".  Any one of the challenges would have been insignificant. It was just so many on top of the rain and awning problem.

Friday should have been an easy 83 mile drive.

The good thing is we only seem to have problems when we are moving from place to place. Fortunately we have many safe, easy driving days to balance things out.

Next move: Saturday, down to the Florida Keys! Hopefully it will be an easy one in spite of the Miami traffic and Craig's desire to stop at a Trader Joe's on the way.