New Garage Doors have been ordered 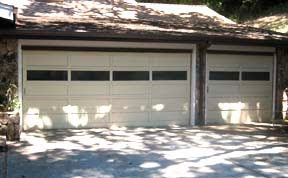 Last week when we started to work on the front of the house we decided the trim boards around the garage doors were too far gone to repair.  We also decided the garage doors themselves were in need of replacement.  They are old wood doors and although it is not visible on this picture, they have some decay and water damage. (The white boards around the doors are newly replace and just primed.) 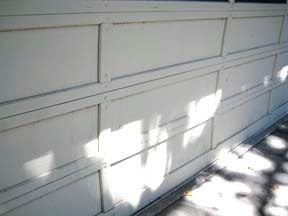 This is a better picture of the door's sagging appearance!


I don't know why it is, but whenever Craig and I have to choose something or hire someone, it becomes a major crisis. We never seem to agree right off.

I told him it was his turn, but of course I went out and picked up brochures from Home Depot, Lowe's, and Costco.

He looked at them and then choose another  company to look at.  He wanted to get fiberglass doors, and the large home improvement stores don't have them.

Of course the fiberglass doors  were almost twice as much as good quality steel doors.

I frowned.  Or as he said, I glowered!

I didn't think it was an effective use of home improvement money.

If we were going to be here for the next 20 years, OK, but I think good insulated steel doors would find just as much favor in the eye as a potential buyer.

I guess I watch to much HGTV.

Always wanting a decent return on our investments!

We went to look at the doors at the showroom. The doors he liked were quite beautiful and I agree, a cut above the steel.

But it turned out the doors he liked  only came with rounded windows. Rounded windows would not look right with the style of our house, so we ended up ordering the steel doors. From the company he choose rather than a Home Depot or Lowe's.

They should be installed in about three weeks.  I'm happy with the order, and I think Craig is OK with not getting the ones he originally wanted.  But I do wish it was easier for us to work together!

So the week ends with the outside work  progressing nicely.  Hope we get lots done over the weekend!

Labels: Relationship, Work on the house