I feel like I'm going into too much detail, but I don't know what to leave out. 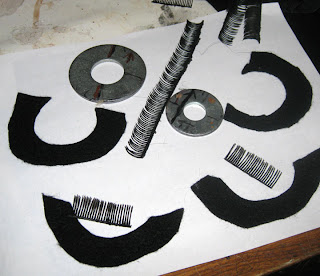 My work day started at about 9:30 AM.  The first project was to do what I call the eye-liner on the zebra.  I do this same treatment for all of the animals.

I have several large steel washers that I use as patterns to cut these shapes out of black felt.  I buy the eyelashes a gross at a time and cut them to length.

The zebra, deer,moose and impala have eyelashes, the cheetah and the wart hog do not. 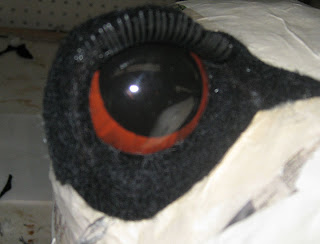 I glued the larger circles around the under eye first. The  eyelashes were glued to the inside of the top felt, and then it was glued over the eye. 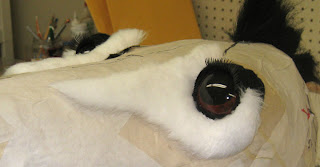 When I cut out the stripes for the neck, I also cut out the pieces of white fur that go around the bottom of the eyes. This is the last "pre set" pattern piece I  used.  From here on, each stripe was figured out and cut in pairs, making tiny adjustments from one side to the other. 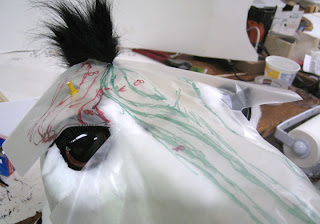 I continued to use waxed paper to make the pattern for each stripe, but since it was not  kept for future use, I traced the shapes onto the furs without making poster board cut outs. 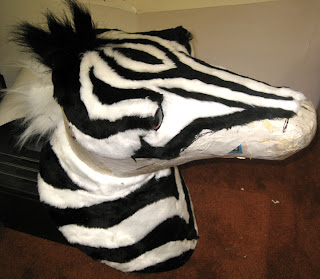 By 2:00 o'clock I had gotten this far, and was tired of working on the zebra. 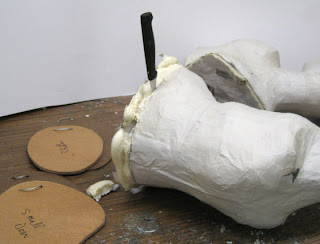 So, I switched over to my other work bench and trimmed the extra foam from the other head base sculptures.

I had cut out the hardboard backs for them on Monday. 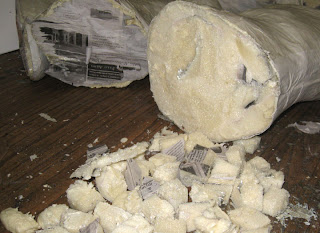 I cut the foam even with the edge of the shell, and cut the removed piece into chunks that will be saved for the next pour.

I then attached to backs to each sculpture with masking tape and made any adjustments to them so that they would agree in shape.

I then applied several layers of paper mache over the back and edges and put them out to dry.

I finished that by 3:30 PM, so I did a little bit more on the zebra before calling it a day.

Come back tomorrow and see what's next.
Posted by Merikay at 8:25 PM