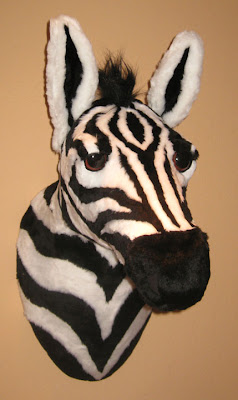 I finished the Zebra by early afternoon. Doing the mouth and nose is always a struggle, but  is impossible to illustrate with  pictures.  I just make it work.

This is a terrible picture of him.  Craig will take a better one for the web! 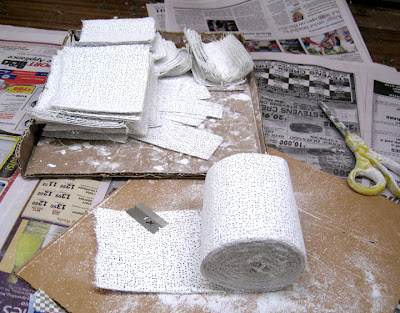 The next task I undertook was to prepare some of the "Plaster Cloth" for the moose antlers.

I buy it in twenty pound boxes from an art supply house in Wisconsin.  It is the same material that used to be used for casts for broken arms and such.
The boxes I buy now are neatly wrapped rolls.  When I started using it I was able to get the "waste ends" and it was much less expensive.

I used a single edge razor blade to cut it into manageable size pieces. 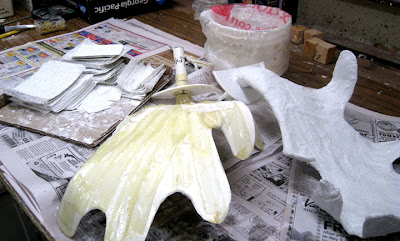 I worked a layer of the Plaster Cloth over the resin coated moose antlers.

Each piece was dipped into water first, and then smoothed into place. This took less than an hour.


The final project for the day was to install eyes in the other sculptures. 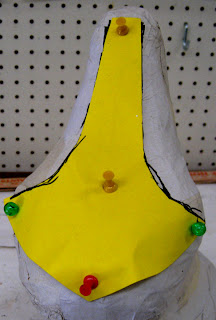 I drew around a paper template to  mark where to put them. This is the deer. I did the same for the other three. 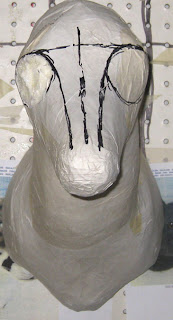 Next I cut thru the paper mache shell to expose the foam underneath.

This is another step I can't really illustrate!  But by cutting, propping with bit of used foam, and crafty hot gluing I get the eyes in place and then paper mache around them.

Sometimes after the paper mache dries, I cut them out again and reposition them as I did with the zebra.

This is as far as I got today.


I'm not sure how much I will get done over the weekend.  I expect to be helping Craig with some drywall work.

Come on back for Post 5 and see whats next!
Posted by Merikay at 9:04 PM