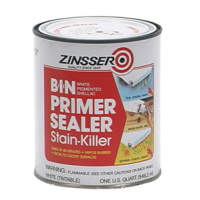 If KILZ is good, BIN is better, or so I was told by the paint men at two different stores. It is a shellac-base sealer and is said to seal in tough stains, pet, smoke and firs odors.  It is also good to seal cigarette smoke smell.

So hopefully it will seal the closet walls.  Craig doesn't agree, and says we will have to replace all the drywall and insulation in the closets and hall to do the job right.

I hate to be a "b...." about it, but he has had twenty years to replace the drywall and it hasn't happened!

A number of years ago we sealed the ground area of the crawl space beneath it, and I think that got rid of the cause. There is also some heavy duty dry rot on an outside wall of that area.  It was more than I could deal with when I was painting, and is one of the areas we still have to work on next spring.  I think getting wood replaced and painted will also reduce the "cause."
So for now the closets have been given two good coats of BIN.  I have to do the rest of the hall before we rehang the doors, and then we will see if after some time of being closed the odor returns.

At the moment they are empty, and I don't want to put anything back into them.   I especially do not want to put the boxes of papers back.  I think they held onto the musty smell.  Nor do I want to hang any clothing in them.  (I got rid of the old coats that were in there months ago.)

So they will be empty for awhile. (Maybe forever!)

Tomorrow I will be working on fixing dings and nail holes in the hall walls.

Labels: Work on the house