The Camel's Nose In The Tent.  (a traditional folk tale)

One cold night, as an Arab sat in his tent, a camel gently thrust his nose under the flap and looked in. "Master," he said, "let me put my nose in your tent. It's cold and stormy out here." "By all means," said the Arab, "and welcome" as he turned over and went to sleep.
A little later the Arab awoke to find that the camel had not only put his nose in the tent but his head and neck also. The camel, who had been turning his head from side to side, said, "I will take but little more room if I place my forelegs within the tent. It is difficult standing out here." "Yes, you may put your forelegs within," said the Arab, moving a little to make room, for the tent was small.
Finally, the camel said, "May I not stand wholly inside? I keep the tent open by standing as I do." "Yes, yes," said the Arab. "Come wholly inside. Perhaps it will be better for both of us." So the camel crowded in. The Arab with difficulty in the crowded quarters again went to sleep. When he woke up the next time, he was outside in the cold and the camel had the tent to himself.

This story is meant to warn people to "guard their turf."  Or watch out for the "slippery slope." 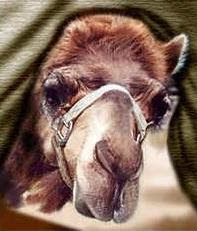 But for us camels,

it's a reminder that success can be achieved a little at a time.  Perseverance is the key.